I’m having this very weird confluence-of-thought thing going with John Gruber right now. My last post was about keyboards and my old Apple Extended Keyboard II, and then a few days later Gruber devoted an entire episode of his podcast The Talk Show to it.

It’s odd because after my last blog post, I thought about why I had given up on what was once my favorite keyboard. It was a combination of no media keys and flaky compatibility problems I always had with the old drivers for the iMate, Griffin’s ADB-to-USB adapter. But then I realized those were all problems in OS 9, which was prone to flakiness whenever it came to third-party devices. Under OS X, I discovered, there’s no software required at all to use the iMate; it just works.

The other issue is the media keys, in particular, I really like having volume and iTunes control at my fingertips without mousing. Then the solution came to me: the PowerMate, also from Griffin. I bought one of these years ago but I never really used it because my Logitech Elite keyboard had all those iTunes controls and a volume wheel, so I never used it. I dug that out, installed the drivers, and discovered that it does exactly what I missed.

So I un-mothballed my old (I mean that, it’s from 1990) AEK II. Keyboards actually get pretty nasty so I spent like 45 minutes cleaning it. And it’s wonderful! I had forgotten what a terrific piece of hardware it is. The only really annoying thing about it is the lack of a wrist rest; I haven’t used a keyboard without an integrated wrist rest in ages. So after a trip to Office Depot for a wrist rest, I’m back in business.

And then today the esteemed Mr. Gruber posted pictures of his old AEK II. See the divot he’d worn into his space bar after years of use? Well, guess what? Mine has the same divot. 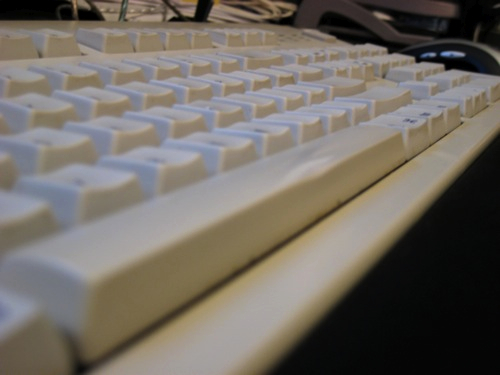 Interesting how similarly they’ve worn. (John’s a much better photographer than me; IRL mine looks even more like his pictures.) This makes me worry that this one isn’t long for this world. It is, after all, almost 18 years old (though it got the last roughly seven years off, or partially off, for good behavior).

So, if anyone has one of these bad boys still new in the original box—or John, if you get any extras in response to your podcast plea—let me know. I’ll be happy to buy it!

So, does anybody make a decent Mac keyboard anymore?

I haven’t liked any Apple-branded keyboard since the venerable Apple Extended Keyboard II. (Yes, I actually still have one, but it lacks modern keys for things like iTunes control and CD eject. That, and I’ve found ADB to USB drivers to be a bit flaky in the past, though that was under OS 9.)

For a long time I used a (now-obsolete) Logitech Elite keyboard. The feel is OK (not great, but OK), the number of extra buttons is about right, and the zero-tilt hand positioning is good. The only problem these days is that the driver software—termed “Logitech Control Center,” or LCC—is simply awful from a compatibility standpoint. If they fixed the software I’d just keep using this. Failing this, right now I’m using a Logitech S530 which is natively a Mac keyboard so can be run without LCC. It qualifies as “barely passable.” Am I stuck with this or is there really something better out there?

So what’s the alternative? I won’t go with anything from Matias, since years ago I tried their “Tactile Pro” keyboard (same switches as the old Apple Extended II) but several of the keys failed, and they never answered any of my calls or emails about it. Even if that was a one-in-a-million lemon, I won’t buy things from a company with customer service which is that bad.

I’m upgrading to a newer version of WordPress. I have no idea how long things will be a little off. The basic upgrade to 2.5 appears to have gone OK in terms of data and such, but there may be some cosmetic glitches for a while as I experiment with new themes and such.

Err, pardon our dust, or whatever.