I don’t do a lot of serious work with spreadsheets. Most of my data either ends up getting dealt with in stats packages or if it’s something requiring anything custom, I’ll write a program of my own to deal with it. I use spreadsheets mostly for things like grade rosters, when I do my taxes, and for non-mission-critical work like fantasy football rankings.

I own three spreadsheets: Apple’s Numbers, Microsoft’s Excel, and Mariner Calc. Those of you who follow along here are probably expecting another round of Microsoft-bashing, so perhaps this will be a surprise, but I don’t think there’s any real contest here: Excel is clearly the champ here.

Before I get into this, another historical note: my favorite Mac spreadsheet used to be Informix Wingz, which was then later rebranded as Claris Resolve. Powerful functions, great graphics, and a macro language which was actually parseable by humans (based on HyperTalk, how cool is that?). This was software that was way, way ahead of its time in 1989—no current spreadsheet is nearly as good. Progress is, unfortunately, not always forward.

This is a battle of attrition: I don’t really like Excel all that much, but the other two are just not ready for prime time. Mariner Calc is OK, but it lacks the statistical functions that I need (like z-, t-, F- and chi square distributions), I’ve found more than one error in calculations (I’ve reported them and Mariner claims that they’re fixed, but who knows if there are more?), and the UI just doesn’t make it. For example, when you’re in a cell, the row and column indicators don’t change to indicate where you are in the spreadsheet, like so: 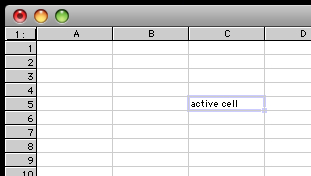 Not really that big a deal when you’re in C5, but when you’re in K39 it’s often useful to know, visually, what row and column you’re in—like in every other spreadsheet I’ve ever used. I requested this feature ages ago, but Mariner never did anything with it. This is just a dumb UI fail, a “please don’t buy our product” signal from the developers.

Now, Numbers. Numbers is an interesting effort from Apple, an attempt to kind of change the paradigm for spreadsheets. Instead of the “sheet” being the basic unit, the “table” is the central unit, and each sheet can have multiple tables—and of course each document can have multiple sheets. This is kind of interesting and there are certainly advantages to doing things this way, but it does add a lot of clutter if you just want one single very large table (and no others) because there’s all this screen real estate devoted to managing multiple tables in a sheet that you won’t need. OTOH, there are some cool things that this enables, as multiple separate tables on a single page can be useful, particularly for things that have to be printed out. So, there are things about Numbers that I like, but there are just as many that I hate. Here are the two things I hate the most:

• Exporting from a Numbers document is incredibly cumbersome. This is important, because lots of other apps like simple and dumb, but also highly portable, you-know-everything-will-be-able-to-read-it-in-10-years formats like tab-delimited text. First of all, Numbers doesn’t even support tab-delimited text. WTF? It supports CSV, but I hate CSV because CSV files aren’t as human-readable, and commas are crappy delimiters because lots of data has commas in it one way or another. Second, Numbers handles multiple sheets/tables incredibly stupidly: you can only export the entire document, every single sheet and table, or nothing. You can’t just export the part you want. Mind-numbing.

• Sorting is stupid. Numbers won’t let you sort only a part of a table; again, it’s all-or-nothing. (Technically, this isn’t quite true; it’s possible to sort only some rows, but when you do, it still sorts all columns for those rows. Ugh.) This just defies any reasonable logic whatsoever. Well, maybe that’s a little harsh. This completely defies my mental model for how a spreadsheet should work, and I can’t stand it. I don’t care how much of a “new paradigm” this thing is supposed to be, it should not completely break major chunks of previous knowledge about how spreadsheets work.

The other kind of stunning thing about Numbers is that there’s no way to edit a Numbers spreadsheet on an iPhone—at least, none that I’ve been able to find. The great irony is that there are many iPhone apps that will allow you to edit Excel spreadsheets on an iPhone, but not Numbers. (Double irony: Mariner’s Calc iPhone app will let you edit Excel sheets, but not Calc sheets. WTF?) Hey, Apple, fantastic job on platform integration there! (Side note: I like having small spreadsheets on my iPhone for small tasks, and usually all the editing I do is enter data onto them, but that’s enough that it’s useful.)

So, the winner—again, mostly by attrition—is Excel. I’m not thrilled with Excel, of course, as the launch time is hideously long and it has some UI quirks of its own, and of course is full of Microsoft bloat. However, Excel seems to do a better job of containing that bloat than the other Office apps and so it’s bearable. I think this is an area where a third-party really could compete with the big boys, but none has yet risen to the challenge.