About a week ago, my new Ascend Acoustics Sierra-1 speakers arrived and I had a chance to set them up. I have 30 days to decide if I like them, as Ascend is an Internet retailer and it’s hard to get to audition a pair. Here are my thoughts after about a week or so of listening (noting that I was out of town for about half of that week):

General
First and foremost, these are highly detailed speakers. Because my younger son was a light sleeper as an infant/toddler, I got pretty into headphones for a while. While headphones have their issues, the one thing decent headphones give you, much better than a great many speakers, is detail. These speakers, right out of the box, deliver headphone-like detail. This is far and away the most impressive thing about these speakers across the entire frequency range.

The best anecdote I can give is that my wife, not exactly an audiophile, walked in while I was listening. I asked if there was anything she wanted to hear, and she chose Queen’s “Another One Bites the Dust,” a song our kids love and that she’s heard many, many times. After it was mostly done, she looked at me and said “There is more to this song than I realized.” Yes, she was hearing details she had simply never heard before.

Highs
I’m used to metal (or at least poly) tweeters; the Sierra-1s use soft-domed tweeters. There’s a certain zing you can only get from metal tweeters, but of course there’s often a cost of some harshness or fatigue. The Sierra-1 tweeters do an outstanding job of providing detail and wonderful imaging and soundstage, and without the fatigue. They’re very smooth, and handle music that other speakers hiss out as sibilance very well. They are not, however, quite as sharp as the harder-material tweeters that I’m used to, which is both good and bad. It’s like all the really sharp bits of the music have been rounded off. I’m not sure if it’s more accurate (probably for some things and not others), but it’s definitely different.

The place where these deliver the strongest performance is violins. Violins are, in my opinion, one of the hardest instruments to reproduce well, particularly in the higher part of their range. A lot of speakers (and headphones) turn even well-played violins into a screechy mess, or at least generate more screech than what I would expect to hear live. The Sierra-1s are, so far, absolutely magnificent at reproducing violins. If I keep them, they will almost certainly end up costing me money, as I’ll have to invest in more violin music. Darn.

The one downside of all this fabulous detail is that the Sierra-1s reveal flaws pretty effectively. Bad recordings and bad compression are made evident quickly. I don’t have a lot of music that suffers from bad compression, but there are a few 128 kbps tracks in my library, and they tend to stand out through the Sierra-1s. My previous speakers provided slightly less detail, of course, but were a little more forgiving as a result.

Midrange
This is where these speakers really, really shine. Vocals sound liquid smooth, and all the nuance (for singers that have any—I’ll admit I like some that don’t) is present. Whatever was done in the crossover for these speakers was done really well, because with most two-ways, there’s an audible dip in response where the drivers cross over (sometimes somewhere in the vocal range, yuck). I don’t hear it at all in these speakers, much to my amazement. Middle piano notes are crisp and clear, and electric guitars in this range have great punch. But it’s really the vocals that shine. My wife commented that “Freddy sounds awesome” on these, referring of course to Queen’s Freddy Mercury. It’s almost enough to make me an opera fan… well, not really, that would require the proverbial “act of god,” but that fact that I even thought it is a testament to how well the Sierra-1s do vocals.

Bass
OK, let’s be clear: these are bookshelf speakers with 5.25” drivers. My thought going in was “How much bass could they possibly deliver?” Well, so far more than I thought. The bass is far better than I could have imagined from speakers (and drivers) of this size. It’s tight and clear and without a doubt the best bass I’ve ever heard from a bookshelf speaker without help from a sub. They do a great job of generating sound like a floorstander while still being bookshelf-sized. I’m generally pretty skeptical about claims in marketing copy, but maybe there really is something to the bamboo construction. That or there’s some serious mojo in the drivers. Or both.

Now, while bass clarity and volume are good, the bass extension is not quite as good as the speakers they replaced; I expect this is due to the physical size limitations, but they definitely do not go as low. On the other hand, very little music really taps hard into that frequency range. My test track for bass extension is “Root Beer” from the American Beauty soundtrack, which has significant signal in the 25-40 Hz range, and the Sierra-1s don’t get much of it. However, I don’t think many bookshelf speakers do much better.

Of course, the trendy thing with bookshelves these days is to add a subwoofer. Frankly, I’ve never been a huge fan of subwoofers for music (though of course they’re integral in home theater) and these go low enough for most music that I will only very rarely miss the lowest bass extension.

Aesthetics
I ordered these in the “light cherry” finish because that’s what I thought would go best with the other wood in my study. It didn’t hurt that Ascend had that finish on sale for $160 off around the time I was planning on ordering them anyway. Anyway, not to put too fine a point on it, these are simply gorgeous. They’re made out of bamboo, not MDF, and the finish is light enough that you can see the grain of the bamboo. The finish itself is like glass, a really beautiful shine. The down side of this is that fingerprints are instantly visible; thoughtfully, the speakers come with a pair of white fabric gloves so you can handle them without leaving too many. Here, check out the pic: 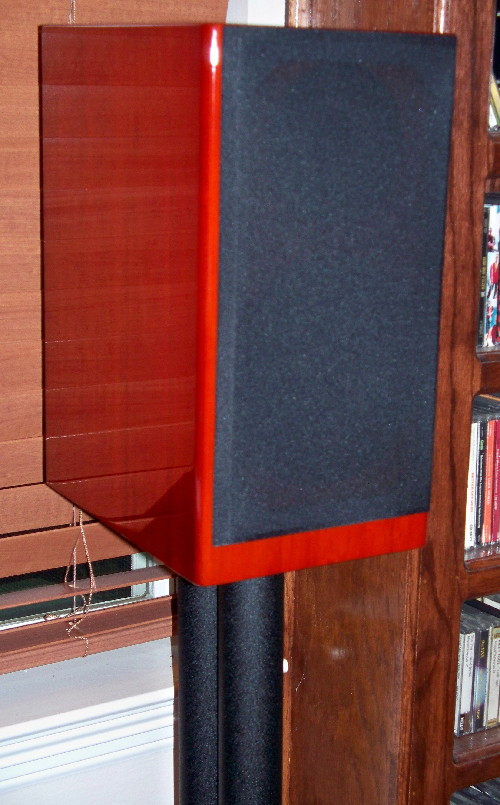 My meager photo skills and cheap camera simply do not do justice to them, but as you can see, the finish is high-gloss—the reflection of the blinds behind the speakers is pretty clear even in this photo.

Also, you can see some CDs on the shelf on the right for a size comparison. Oh, that’s a Sanus SF30 stand that it’s on, by the way.

The Verdict So Far
Generally, I’m pretty impressed. Overall I like the Sierra-1s, but there is some adjustment. I have some tinkering to do yet, and lots more listening as well. The tinkering is that as you can see from the picture, these are pretty close to the wall/window, and the Sierra-1s are rear-ported. I think the overall tonal balance might be a little bit off as a result and the bass maybe a smidge boomier than optimal because of the placement. Ascend has specially-designed foam plugs to use in the rear ports for difficult placements, and I’m certainly going to give those a try once I get used to how they sound without the plugs.

However, even without the tinkering, as I said, I am so far pretty impressed with these, particularly for an $800 bookshelf speaker. During my 30-day trial I plan to also go out and audition some other speakers: Paradigm Studio 20, B&W 685, KEF iQ30 and maybe even the Klipsch RB-81, though I’m generally not a huge Klipsch fan. My home theater rig is PSBs, but right now PSB doesn’t seem to make anything in the right size/price range. These other speakers will really have to show me something to get me to send the Sierra-1s back; I will be particularly astonished if I find a rival in reproducing violins, but I’m going in with an open mind since I haven’t heard the others yet, and those are all generally favorably-reviewed speakers as well. So, while I’m impressed, I’m willing to be even more impressed by something else, though I’m not counting on it.

Setup Notes
This is my study, which is the home of my primary computer setup. Music is a mix of 256 kbps VBR AAC/MP3 (stuff bought through the iTunes store or Amazon MP3) and uncompressed. This is fed from the optical out on my Mac Pro into the outboard DAC built into a HeadRoom Desktop headphone amplifier, which routes the RCA outs to a NAD C740 receiver. This is obviously not super high-end or anything, but it’s definitely a cut above standard Best Buy-grade fare.

Background
This is only for the deeply interested reader; I put it last because it’s only marginally relevant to the review. Anyway, 20 years ago, almost to the month, my uncle gave me a pair of speakers that he built himself. He’s pretty serious about it and these are not just some slapped-together boxes. They were three-way speakers with Audax TW010E1 tweeters, 8” woofers, and a midrange with specs I don’t remember. These were highly capable speakers that served me well. However, since we moved into a new house in 2006, I’ve been less happy with them as my study (where they lived) is a cozy 10’ 4” by 11” with a substantial portion of that meager space taken over by bookcases. That is, the room is a little tight for them. I’ve wanted something smaller—like bigger bookshelf speakers on stands—ever since we moved in to this house. Space issues also mean that a subwoofer is not a realistic option.

The real problem, however, is that the speakers started to fail. In particular, the woofer surrounds were literally disintegrating: 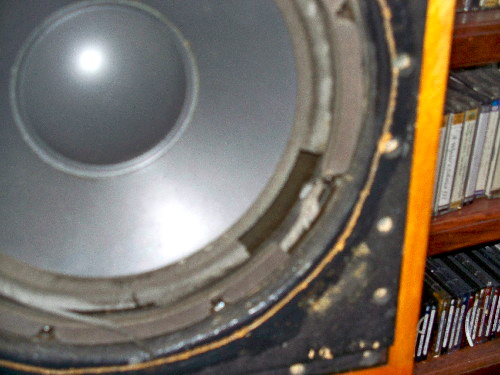 Yep, time for new speakers. 20 years of good sound for free, though, is nothing to sneeze at!