I have yet to see a decent-length review of these speakers yet so I thought I should get one up before the Web is flooded with them, though perhaps this is enough of a boutique item that won’t actually happen anyway. We’ll see.

What is the Ascend Acoustics Sierra-1 NrT?

It’s a speaker you cannot actually buy right now, but will be able to perhaps sometime soon. Essentially, it is an upgraded version of the highly-regarded Sierra-1. Ascend has allowed owners of the Sierra-1 to upgrade before the Sierra-1 NrT is made available. I am one such owner so I did the upgrade.

The original Sierra-1 is a very, very good speaker for the money. I posted some initial reactions to the speakers not too long after I got them. Since that post I’d done some shopping around while I was still in my 30-day return window. Local dealers aren’t abundant anymore and those that are around are scattered to the four winds here. I went with a friend of mine and we listened to some other speakers, then came back to my house and ran the same music through the Sierra-1s. We listened to the Focal Chorus 706V and the Paradigm Studio 20. On my own, I also listened to the B&W 685 and the B&W CM1. Frankly, the Sierra-1 is a markedly better speaker than all of these. The Focals were, IMO, absolutely awful with no midrange whatsoever. The B&W 685s have a very congested midrange. After I had heard them I found a review that said it much better than I could: they are like listening to music with a heavy beige quilt draped between you and the music. I couldn’t agree more. I liked the CM1s better than the 685s, but they just have no bass at all, which didn’t cut it for me. The only thing that came close was the Paradigm Studio 20s, which only somewhat close. Bass on the 20s is very good, but still not quite as tight and controlled as the Sierra-1s. The Sierras image better and have a cleaner midrange. The only thing I liked better on the Paradigms was the very top end. The metal domes give the tweeters more sizzle, though in the case of the Studio 20s it might be too much of a good thing and I found them a little harsh with violins. And, of course, the Paradigms are more expensive.

The friend I took with me to listen to the Focals and Paradigms, when he heard the Sierra-1s, almost immediately said “do not send these back—nothing we heard today was even close.” Well, I thought the Paradigms were vaguely close, at least at the high end.

My father, who currently has a lovely Sonus Faber setup, also concurred that he’d never heard anything like the Sierra-1s in their price range. He still likes his Fabers better, of course, but it’s not like that’s the same price class.

Anyway, the point I’m trying to convey here is that the “vanilla” Sierra-1 is an excellent speaker for the price. I really, really liked them, with only a minor quibble about high-frequency performance.

How Is the NrT Different?

There are two differences between the original Sierra-1 and the NrT version. First, the NrT uses a different tweeter. The original tweeter was made by SEAS of Norway, and so is the new one. The new one uses a much lighter but more powerful neodymium magnet in a “ring” configuration. (“NrT” stands for “neodymium ring tweeter.”) The tweeter housing is the same size so the new tweeter simply drops into place.

However, it would be pure foolishness to put a new tweeter, with different performance characteristics, into a speaker and just be done with it. The crossover also had to change—and change it certainly did. Check out the picture of the two crossovers (old one on the left, click to embiggen): 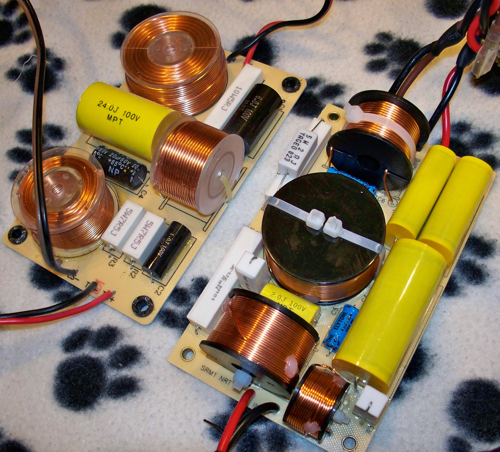 The new crossovers are supporting some serious caps and loops.

So, what is the new tech supposed to do? The primary thing I was looking for is more sparkle at the top end. The soft dome tweeters on the original Sierra-a are just a smidge too smooth for me, even in cases where I wanted them to be more edgy. Note that was I was looking for was not simply a more forward presentation. I tend to dislike overly forward sound; for example, I don’t care for Grado headphones because of this. I just wanted, and was promised, more overall crispness on the high end. The manufacturer described the difference like this:

This new tweeter is fast, delicate and with loads of top-end air. It is the perfect solution for those that like the advantages of a soft dome but yet miss some of the positive aspects of a metal dome.

The upgraded tweeter is sharper and quicker, there is a noticeable improvement in attack and decay, such that instruments have more *snap* to them, a more concise impact. For example, with cymbals, the impact is clearly more defined with more delicacy and shimmer.

I should mention that there is a lot more to this new tweeter than frequency response improvements. Improved damping, better transient accuracy, higher power handling, better cooling and lower distortion — but I feel the most obvious way to visualize the improvement is to simply compare the response measurements.

And those are exactly the kind of things that I wanted, so I took the plunge and plunked down for the upgrade.

Ascend gave two options for the upgrade: ship the speakers back to them and have them do it, or have the parts shipped to you and do it yourself. I chose the latter option. The upgrade was easy to to do, requiring pretty much just a screwdriver and a small wrench, and the nice folks at Ascend provided both paper and video instructions on doing the upgrade. I was a little paranoid doing the first one and it took me probably 25 minutes. With better familiarity and working with less paranoia, I did the second in between 10 and 15 minutes. These times do not count the time to wipe down the speakers afterward, as I have the high-gloss finish and I managed to cover them in fingerprints, which I just couldn’t leave.

Did the NrT Deliver?

In a word, yes. The NrT setup not only provides the desired sparkle at the high end, rendering cymbals with appropriate sizzle, but it has opened up the speakers even further. The soundstage is wider and imaging overall even better, which I’m not sure I would have thought possible for speakers that already excelled in these areas. There is additional clarity starting in the upper midrange, making female vocals even more airy and compelling.

Some specific thoughts based on my Audio Test Mix:

* Cymbals, cymbals, cymbals. This is what I was really looking for, and it came through in spades. Marked improvements in “Every Little Thing She Does Is Magic,” “Oasis,” and “Root Beer.” This was the only thing I thought the metal-domed Paradigms did better than the Sierra-1, and now the crown here goes back to Ascend. Absolutely nailed it here, though I wasn’t terribly surprised because this is what was promised.

* The place where the NrT most surprised me was the acoustic guitar, particularly the Rodrigo y Gabriela piece “Hanuman.” The additional crispness and detail was probably most felt, and most impressive, here. The NrT upgrade improved not only the high end, but the midrange as well, quite significantly. Anecdote time: my younger brother is not much of an audiophile. Not in the sense that he can’t discriminate better from worse, but in the sense that he almost never feels that the level of improvement justifies the expense. (He’s got more of our mother’s skinflinty leanings than I ever did.) Anyway, he knows RyG’s work very well (he was the one who got me into them) and when I played “Hanuman” for him on these he was just blown away. This was the first time I have ever seen my brother visibly impressed by audio equipment. He’s a tough audience, and he was really floored, and this was the track that really did it.

* As noted, female vocals are improved as well. This was very clear on “Il Pleure” though it didn’t seem to make quite as much of a difference with Tori Amos on “Precious Things.”

* Electric guitar on “Stinkfist” was also much improved, much more aggressive-sounding, more in-your-face, which I’m pretty sure is Tool’s goal there. The improvement was less noticeable with the Cult’s “Wild Flower” probably because it’s not as good a recording, so YMMV here.

* The violin-oriented classical (“Summer” and “Concerto for 2 Violins”) didn’t improve as much as some of the other material. The wider soundstage is nice and it feels like there’s more “air” with these speakers, and the imaging is improved, and all of these things are most definitely better—it simply made somewhat less difference here than elsewhere. I think the slightly more forward presentation offset the other gains just a little bit, though overall I would still say these tracks sounded better, just not as much better as some of the others.

Overall, I’d have to say I’m definitely very happy with the upgrade.

To be fair, I should note that the speakers are now somewhat more forward overall. For example, they do not contain the screech of a violin’s highest notes quite as well. However, this effect is not pronounced. The frequency response graph for these speakers is still remarkably flat, but where there was a small (maybe ~2.5 dB) dip in high-end response (around 3kHz), it’s now flatter in that region and actually shows a spike at very high frequencies (25kHz, but I’m sure I’m deaf at that frequency anyway). The additional detail and resolution can punish bad recordings, though it doesn’t always. The place where I’ve most noticed this is mediocre 1980s recordings that use drum machines in place of real cymbals. While real cymbals sound much better, bad fake cymbals actually sound slightly worse by virtue of it being more obvious that they’re fake. This doesn’t seem to be a problem with more recent drum machines; for example, Underworld sounds just fine.

This is, on balance, a small price to pay for the overall upgrade in sound quality. My friend who had been speaker shopping with me before came down to listen to the upgraded speakers, and he agreed that they were both slightly more forward but overall even more amazing. As far as I’m concerned, the NrT has upgraded the speaker from “excellent” to “superlative,” as it rectified my only previous quibble with the sound. Now, this does make the speakers overall somewhat more expensive, but for me it was definitely worth it. If you own Sierra-1s and you’re already perfectly happy with the top end and absolutely do not want to mess with the overall balance of the speaker, the NrT upgrade may not be for you. If, however, you want more sizzle, an even wider soundstage and even better imaging (and don’t mind an ever-so-slightly more forward speaker), then the NrT is definitely the way to go.

Setup Notes
This is not HT, this is strictly two-channel music. This is my study, which is the home of my primary computer setup. Music is mostly lossless (ALAC) fed from the optical out on my Mac Pro into the outboard DAC built into a HeadRoom Desktop headphone amplifier, which routes the RCA outs to a NAD C740 receiver. This is obviously not super high-end or anything, but it’s definitely a cut above standard Best Buy-grade fare. I do have some tracks at 256 kbps VBR AAC/MP3 (stuff bought through the iTunes store or Amazon MP3), but I avoid those for critical listening.