This is, in some ways, almost scooped by a very nice survey of the current Standard by Jacob Van Lunen appearing on the mothership. I’d refer you there for decklists for almost all the archetypes mentioned here, though I will have a couple comments on some of them.

Van Lunen’s piece does a great job of detailing what is in the metagame, but it doesn’t describe how much of each thing there really is in the meta. That’s my main purpose here.

First, what I did: I looked at all 368 top 8 decks posted for the 2013 TCGPlayer Spring States. States are an interesting meta, not quite a PTQ but more competitive than your average FNM. By looking at the top 8, however, i think it may provide some insight into what might be expected to be found running around a PTQ or maybe an SCG Open (of which there are two Standard Opens in Dallas this week, plus a TCGPlayer 1K in Houston—what’s up with Texas this weekend?). It’s also not quite the MTGO metagame, but again, I think it’s an interesting picture. The data aren’t perfect, of course, since the listings on the site aren’t always consistently named, but I think there’s enough overall data to overwhelm that little bit of noise.

So, I did a little counting and aggregating across decklists, and generated this: 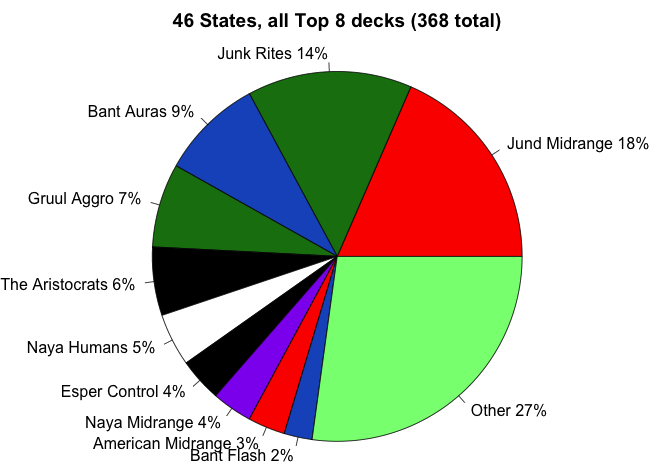 That is a lot fewer overall archetypes than appeared in Van Lunen’s piece, but of course the “other” slice of the pie is quite large here. That “other” slice represents all decks with less than 2% of the metagame, 47 different archetypes spread across 100 decks.

So, your Big Two decks are clearly Jund Midrange and Junk Rites. Junk Rites was maybe not the consensus “best deck” before Dragon’s Maze, but it was pretty clearly one of the top “decks to beat.” It still is, but it looks like at the top tables, there are more Jund Midrange decks being played. Sire of Insanity is be the big addition from Dragon’s Maze.

Our next two decks are Bant Auras, a deck that was popular for a while then went away, and now is back, probably mostly because of Armadill…err, Unflinching Courage. (Voice of Resurgence is pretty good in that deck as well), and Gruul Aggro, a deck that mostly doesn’t run any Dragon’s Maze cards at all.

The real takeaway, though, is that the metagame has a lot of variety in it. There is no single “deck to beat” and a lot of different things can be successful right now. Control continues to be a little down, though I have a suspicion that as Ætherling starts to show up in standard, we may see at least a little bit of a comeback for control. (Esper control also go Far // Away and RWU got Turn // Burn, both of which seem very viable.)

I tweeted an earlier version of this graph to Aaron Forsythe, head of WotC R&D, to get his reaction. Here was his reply:

It is indeed very green. In fact, a substantial proportion (69%) of the “other” slice include decks that run Forests (remember, many shocklands count as Forests). Green is almost everywhere in the current metagame. Aristocrats, Esper Control, American Midrange, and a few rogue decks aren’t running green; everyone else is.

After I tweeted another version of the graph—which Aaron kindly retweeted—@joshuamilliken asked a very pertinent question: Which decks actually won those top 8s? So I generated another graph, this time with just the winners, and something interesting emerged: 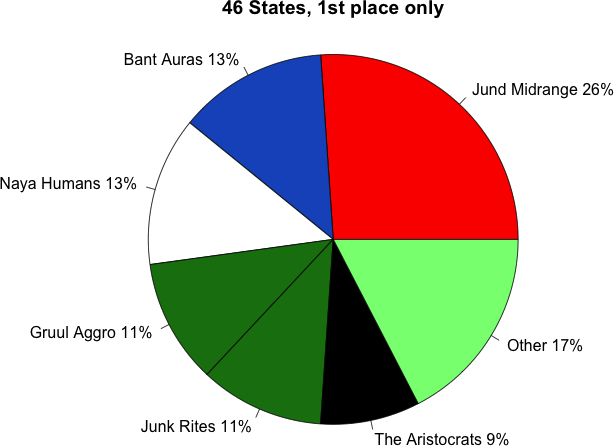 Whoa! What happened to Junk Rites? And look how hot Naya Humans (also commonly called Naya Blitz) is, relative to how many made the top 8. Also, looks like going rogue can get you to the top 8, but it’s not as good a bet once it gets there. Note that American Midrange, Naya Midrange, and Bant Flash are now part of the “other” category, and that all 8 decks in the “other” category are singletons. (Esper Control is not—not a single Esper Control pilot won any of these 46 states.)

So what’s going on?

I think Jund Midrange gains here because it’s a hard deck to hate out. Look at a typical Jund Midrange 1st-place list from States. It’s just a collection of strong, moderately synergistic cards from the Jund colors. There’s no one clear strategy to hate out there. True, it’s not super fast, but it has a lot of removal for the early game and life gain for the middle game, plus ‘walkers and Olivia for the long game. There’s no obvious “sideboard this particular card” that handles this deck, so it’s pretty resilient against the field. I also think Sire is helping Jund in the control matchups.

The one place you’d think it might be weak, particularly game 1, is against Junk Rites. However, what’s particularly interesting here is that I took a more careful look at the 12 Jund Midrange decks that came in first, and the majority of them (I think it was 7) run at least one, and often two, Ground Seal in the main deck. That’s right, not just in the sideboard, in the main deck. Sure, most Junk Rites decks are running 3 or even 4 Acidic Slime main deck, but still, that’s a meaningful hurdle.

Main decking Ground Seal seems like a great strategy against Junk Rites and any deck running Snapcaster Mage, and while it doesn’t seem very good against the rest of this pie chart, at least it doesn’t cost a card. Making what can be a tough matchup into something where you’re actually favored game 1 is probably worth it, and those can be boarded out in game 2 against everything else.

Naya Blitz also gains a lot when it reaches the top 8. I think this is because the deck is just too fast for Junk Rites, which lost a little in this matchup because of the popular change from Centaur Healer to Sin Collector. The Collector is a great 2-for-1 against a lot of decks, but Blitz runs few non-creatures and a 2/1 body is just not the speed bump that a 3/3 body plus a Healing Salve is. So my guess is that Junk Rites is giving away top 8 matches to both Blitz and Jund, but even that’s not enough to quite account for Blitz’s big jump here.

Bant Auras, Gruul Aggro, and The Aristocrats also all get a little bit better in the top 8, but this change is not dramatic. My guess—and this is speculation, I don’t have numbers to back this up—is that this is mostly at the expense of the “other” category, and this is probably where most of the Blitz increase is coming from as well.

Also note that this chart is even more green than the last one. Apparently, in the current Standard, is actually is easy being green.