So, Theros has been released, and there’s been a Pro Tour, and TCGPlayer hosted States. Maybe your’e getting ready for Game Day or for an upcoming FNM and you’re wondering about the metagame. Well, I can’t forecast what the metagame will but, but I can relay some information about what the metagame was for States.

States is kind of an interesting set of tournaments, being more competitive than your average FNM but certainly not at the level of a GP, and maybe not quite at the level of a PTQ, but not a casual format. By looking at what did well at States, perhaps there’s something to be learned. The great thing about States is that TCGPlayer posts all the decklists, tagged by archetype, so it’s easy to look at the whole thing and figure out what happened. These States were also held at an interesting time, being mostly Saturday events after the first day of Pro Tour Theros was in the books. Some of these were held on Sunday, so for those, everything but the top 8 was in the books.

So, I took a look at the top 8 decks from all 351 decks from the 44 states that have reported in. (Note that that should be 352 decks. For some reason, Illinois only reported 7. What’s up with that?). Now, these data aren’t perfect, because sometimes decks get mislabeled or put into a category that they don’t really quite belong in, but the sample size is large enough that hopefully it’s still informative.

So, I did a little counting and aggregating across decklists, and generated this look at the top ten archetypes, plus those that didn’t get up to 4% of the metagame: 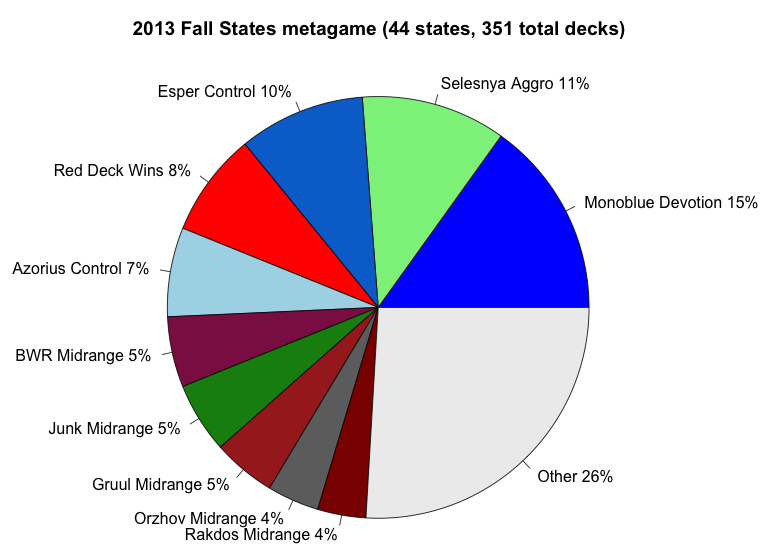 Wow, look at all that Monoblue Devotion! That’s a deck that wasn’t really on the radar prior to the PT, and it did very well at States. Given that the deck was brand new, the pilots could not have had a great deal of practice with the deck, so that’s an impressive showing, as 15% is a pretty sizable chunk of the metagame.

The next two most popular decks both came in around 10% and represent completely different strategies, straight-up creature-based aggro and generally close to creatureless control. A similar contrast applies to the next two decks, another hard-core aggro strategy and another creature-light control deck.

After that it’s pretty much all red or black based midrange until we hit the “other” category, which is a mishmash of different things, though I would say that category is about a third midrange and a third aggro, with a smattering of control and other offbeat decks (including a Maze’s End deck!).

So, the top 8 metagame is pretty diverse. Unlike the DGM metagame, it is no longer dominated by green; the rotation of Thragtusk and Farseek probably has something to do with that. If you classify the Monoblue Devotion deck as a midrange deck, then the meta is still pretty heavily weighted toward midrange decks. Given that this has been the metagame for a while now, I’m staring to wonder if this is a conscious plan by WotC R&D, as midrange battles tend to be more interactive creature fights, which R&D thinks is more enticing to new players (and probably better on camera).

Now, the numbers above come from the entire top 8. But who wins in the top 8? It turns out that the graph is quite substantially different: 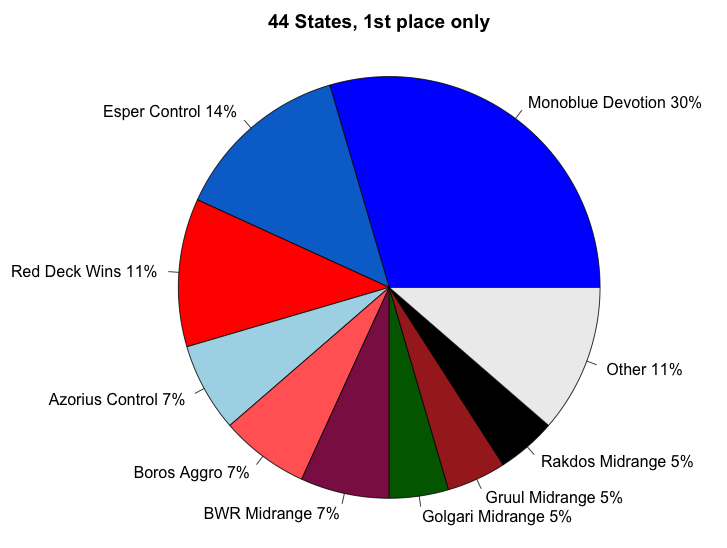 Wow! How about the domination by Monoblue Devotion, which doubled its share, taking home the trophy in almost a third of the states? Esper Control also had a nice gain in its share. RDW, Azorious Control, BWR Midrange, and Gruul Midrange were fairly stable from top 8 to champion. Three decks have completely vanished: Selesnya Aggro, Junk Midrange, and Orzhov Midrange. Two new decks have appeared: Boros Aggro and Golgari Midrange, both of which had between 2 and 3% of the top 8 metagame, thus missing the top ten in the earlier graph.

The two biggest stories are probably to be the domination by Monoblue Devotion and the complete disappearance of Selesnya Aggro. I’m not going to say much about the deck that constituted 3 of the top 4 at the PT, as plenty has already been said there. It’s undoubtedly a very strong deck and will probably occupy a central space in the metagame for some time and I think this will be the “deck to beat” going forward. I expect to either see multiple copies in the next several SCG top 8s, unless someone finds a good solution soon.Hopefully we don’t approach Caw-Blade levels of hegemony, but I’m predicting something like the dominance Shards-era Jund had. I hope I’m wrong.

The other big story is the GW Aggo disappearance. Selesnya Aggro had a lot of decks with 18 or more points at the PT, but none of its pilots made the top 8. On the surface it seems to me to be such an obvious deck, as there are so many GW creatures that come out with more power than mana cost (e.g., Fleecemane Lion, Call of the Conclave, Loxodon Smiter, Advent of the Wurm, Boon Satyr) that the deck can create tremendous pressure—with Voice of Resurgence along for the ride, the creature base is crazy good. On the other hand, it has little evasion and no reach to speak of—the threats are powerful, but just aren’t very diverse. I think it’s a good deck, but just not good enough to quite get there at the highest levels. I wonder if the wave of Monoblue Devotion decks will wash this out of the meta (pun intended), or if there’s some way this deck can adapt. I’m pretty sure Skylasher in the sideboard is not a good enough answer, but Mistcutter Hydra might help. Maybe.

So, be ready for lots of Master of Waves and Thassa, then Esper/UW control, then RDW and a bevy of midrange decks of varying stripes. The card pool doesn’t change for quite a while, so it will be interesting to see how the meta adapts.