A long time ago (late 1980s) the best word processor for the Mac was Microsoft Word version 4.0, no contest. Basically, it was that or vanilla MacWrite. Word was much smaller then, more lightweight. Edges of the bloat could be seen with version 5, and version 6 was one of the most colossal disasters in office software history. I’ve also owned Write Now, MacWrite II, MacWrite Pro, various flavors of Nisus Writer, WordPerfect Mac, ClarisWorks/AppleWorks, FrameMaker, Mariner Write, Pages, and I’ve taken several others for test drives (Mellel, a few others whose names I can’t remember). There is a clear winner in terms of history for the best word processor for the Mac, ever. In my opinion, MacWrite Pro was, hands down, the king. Things printed where you put them. Style sheets always made sense and worked in sensible, predicable ways, and there was a differentiation between character styles and paragraph styles that promoted a mental model of the system that actually worked. It had just enough page-layout-style features that you could control things, but it never overwhelmed you with that stuff. 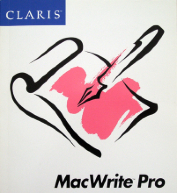 But, unfortunately, MacWrite Pro is dead. The last version released was a long time ago, and once development stopped, it didn’t last long, mostly because it had issues with newer printer drivers, and if you can’t print properly from your word processor, it’s done.

I’m an academic, but I don’t write books. I write scientific journal articles, conference papers, book chapters, and grant proposals send to federal agencies. I also write exams and homework assignments and answer keys for those. I write almost no memos or letters; that’s what email is for in my world. I don’t write fiction, advertisements, brochures, forms, or anything like that. I don’t use my word processor as an outliner; I have an outliner for that. (Yes, there will be a series entry on outliners.) So, my primary use is technical writing.

So, what’s my fist test? I try to generate a document in what I think of as “conference proceedings format.” This is pretty straightforward two-column format, which virtually all word processors can handle with very little pain. The tricky bit is that the first page is different; it requires a single-column start with the paper tile, author information, and sometimes abstract. I also need style sheets to handle various heading levels, figure captions, and body text that sometimes does and does not require a first-line indent depending on whether or not it follows a heading. Maybe this doesn’t sound complicated and it definitely should not be hard for someone with a graduate degree in computer science to figure out.

Most word processors, however, make this task way, way more difficult than it should be. I can usually get most word processors to do it, more or less, but the issue isn’t usually whether or not they can, but how much of a pain in the ass it is to get it running and how sensible the outcome is in terms of mapping from what it shows on the screen to what gets printed on the page. I dislike most implementations that require “sections” to do this. Doing it with a header that appears only on the first page is OK, but doing it with a WYSIWYG text box is the clearest and easiest way I’ve seen to handle this. This is, of course, how MacWrite Pro handled this.

When MacWrite Pro was no longer feasible to run, then I switched to FrameMaker for a while, but that never made the OS X transition, so that wasn’t a viable option. I had been floating around trying different things, none of them quite what I wanted. Mariner Write is non-awful and Nisus Writer Pro has some things going for it, but neither is quite it.

A word, then, on Microsoft Word. I hate Word with a passion. It’s slow (NASA launches things faster), it’s bloated with zillions of features that I will never, ever use, the UI is klunky (exactly how many modal dialog boxes are there?), the implementation of style sheets is horrible, its behavior is completely unpredictable (gee, I wonder where that figure will actually end up, or how it will reformat my text if I somehow accidentally delete the invisible formatting character), and so on. It’s a mess. I only use it when I absolutely have to, generally because I’m working with a colleague who uses it. Even then, I’ll generally translate from Word, edit in something else, and then save back to Word. This is not to say everything about Word is bad, as Word has been the source of some very good ideas. For instance, the first time I saw the dynamic red underlining of misspelled words was in Word, and even if Word didn’t invent that, it popularized it, and that’s a seriously good bit of UI.

So, what I use is Apple’s Pages. It’s the closest thing to MacWrite Pro out there, it’ll always run on the latest Apple hardware and software, it plays surprisingly well with Word, and the UI doesn’t suck. It’s certainly not because it’s an Apple product; I have to say that the first couple of versions of Pages weren’t especially great, and I didn’t really use it. However, the 3.0 (or ‘08) version (actually released in 2007) was good and the 4.0 (or ‘09) version is a useful improvement over that. When people email me Word documents, I almost always open them in Pages because it takes dramatically less time to launch Word and Pages usually does an excellent job of importing with formatting intact. And as much as I dislike “track changes,” Pages does a good job with it and generally handles Word files that have this turned on quite well.

However, it’s not perfect. For example, MacWrite Pro’s style sheets were still better, and it’d be nice if Pages did auto-numbering of figures and equations, but other than that, it’s good enough that I almost don’t miss MacWrite Pro anymore, which is an accomplishment. So, that’s what I use. For now, until someone finds something better.