So, on Friday I test drove four cars. As I noted in that day’s entry, I love my 2002 Mazda Protege5. However, it is getting a bit long in the tooth and I wouldn’t mind a more updated car in terms of saftey and gizmos—and I’d love something faster, of course. I love the size and handling of my Pro5 so I’m looking for something like that; a fast small car with good handling and updated content. Automatic transmissions need not apply. Now, I have two kids (they’re still small) so a strict coupe is out. To be honest, I also don’t really need a new car right now, as my Pro5 has been rock solid. But I just got a raise so it’s fun to look.

The good news is that there are some great cars in this segment and I liked everything I drove. These are all worthy cars and any one of them would be terrific. Of course, I liked some of them better than others. In worst-to-first order:

4th: Honda Civic Si
While overall I liked this the least—but let me be clear, I did like it—the Si has a fantastic shifter. Totally smooth, perfect snick into each gate. On the other hand, this is probably the slowest and worst-handling of the four. The steering wheel provides a little less feedback, the ride is a little too smooth, and it has the standard VTEC engine “torqueless wonder” problem. It’s possible to coax decent response out of the engine, but the thing is almost completely gutless until you hit about 6000 rpm. Now, this is actually doable, but requires a lot of rowing with the shifter. That’s actually kind of fun, but fundamentally the car just doesn’t seem as tight and responsive as the other three. The low torque is indeed smoother when not pushing the car and there’s something to be said for that, but it’s just not enough. Also, this particular Si didn’t have the upgraded tires, so perhaps it would have been better, but it just didn’t stick to the road the way the other cars did.

Also, I have to comment on the utterly inane speedometer. Digital speedometers are a horrible idea. It was a horrible idea on GM cars in the late 1980s, it’s horrible on the Prius, and it’s horrible in the Si. Rate of change is almost impossible to assess, it creates distracting flicker for night driving, and pretty much nobody wants to know that their speed is 57. Maybe the driver wants to know if s/he is above 55 and below 60, which is a very quick glance at an analog speedometer (is the needle in the region I care about or not?) but is harder with a digital. It’s just a bad idea.

Also, a comment to all floor sales managers: when you’ve talked to a customer who has clearly done his homework and knows rather a lot about the car, don’t send a sales guy on the test drive who knows nothing at all about it.

3rd: Subaru Impreza WRX 5-Door
The recent re-design of the Impreza line is pretty substantial in some ways and not in others. It’s a very similar engine, though the improvement in the size of the power band is certainly welcome. The body and interior are totally different, and IMO much improved. The old wagon (5-door, whatever) was ugly, and the interior more than a little on the Spartan side. The 2008 WRX has a dramatically more comfortable and well-appointed interior, and I’m in the camp that thinks the exterior also looks a lot better, too.

The ride is also a lot smoother. In fact, it’s too smooth. It still handles very well, but it’s not as stiff and responsive as the old WRX. The AWD is nice and offsets this a little bit, but Subaru’s obvious attempt to “go mainstream” here went a just a smidge too far and it took the fun edge off just enough that this car came in a bit behind the other two—but only a little bit.

In some sense the WRX is the jack-of-all-trades, but master of none. It’s not as fast and the cabin, while nicer, is still not as nice the Mazda. It isn’t as fun and with the content of the MINI, but rather strikes a nice balance between those other cars. But this is a race where I felt like one car had to be the winner at something, and this wins only at having AWD, which is nice but really not all that big a deal here. The AWD also makes it the big loser at the pump. Considering that this isn’t the high-miles car in the family (that’s our hybrid), that’s not my primary concern, but 25 highway? Really? Seems pretty awful.

Second comment to car salespeople: being knowledgeable about your product is good, but if you spend half your contact time with me denigrating the competing cars, that makes me think that that’s all you have. Sell me on what’s great about your car, not what you think are the flaws of the other cars. If your product is actually superior, that should be good enough.

2nd: Mazda MazdaSPEED3
This is the sub-$25,000 compact car equivalent of being shot out of a cannon. The Speed3 is just teeth-rattling fast. Given the numbers—263 horsepower and a whopping 280 lb.-ft. of torque—this is not a surprise. However, throwing that at the front wheels, well, it seems like a recipe for the worst torque steer ever. What was the most amazing thing to me about the Speed3 is how well-controlled the torque steer is. Apparently the computer works the limited-slip differential and limits turbo boost to manage the torque steer—and it works impressively well. Besides that, the handling is tight and responsive and feedback from the road through both wheel and tires is excellent. Certainly some people won’t like the ride—it’s very stiff—but I rather like it that way. It’s communicative and the tires seem good and sticky.

And it’s strikingly well-appointed—the interior is outstanding, particularly for a car in this price range. The driver’s seat is very good, the ergonomics are sound, the backseat and cargo area are generous (36.3” of rear legroom, which is more than some mid-size sedans); this is a terrific car, practical as well as a kick to drive. And the price is sweet. (Though I’d have to seriously consider factoring in extra expense for speeding tickets.)

I have four minor quibbles: you can’t get a moon roof (laugh if you want, but being able to vent hot air when parked in the Houston summer is not a trivial feature; note that the WRX lacks this as well), the color choices don’t appeal to me (they just dropped both the blue and the silver), no daytime running lights, and there’s a couple minor creature features I’d like (Bluetooth and real iPod integration), though those are indeed minor features. The other thing which was kind of a gotcha for me was the shifter. I think the problem is that in so many other ways it’s similar to my current car, but the gates are closer together in the Speed3 than in mine (which makes sense, since it’s a 6-speed) that sometimes I’d miss, particularly the 3rd gear gate. I think I’d get used to that in, oh, about two days. Or maybe the shifter really is a bit notchier than the other three. Hard to say for sure.

Fundamentally, this is the sensible choice. It’s what I should get if I were to replace my current car. In fact, if I really were going to replace my car now what I really ought to do is go back to the dealer on Monday and grab the last blue one before they’re all gone.

1st: MINI Cooper S (and Cooper Clubman)
I know, the MINI just seems so wildly impractical, but the new “Clubman” version seemed like it could be just big enough that with two small kids it could work.

Now, let me be clear. I am, generally, not into “retro.” However, there is something about the look of the MINI that just really grabs me. And, of course, being a lover of small cars, the size is just wonderfully appealing. But of course with two kids, the pure coupe—I don’t relish the idea of climbing over to buckle and unbuckle our 4-year-old—and the nearly zero trunk just would not work. But the Clubman looked good on paper (well, on the Web), so I had to check it out.

The dealer didn’t have a Clubman S. This is hardly a surprise, the Clubman is very new and they’re still pretty hard to come by. However, the dealer had a regular Clubman and of course many Cooper Ss, so I drove the one Clubman and an S.

First, the Clubman is a trip. When I first saw it, I had to say my impression was that of a really miniature limo—it looks just like a regular Cooper, but stretched out. I mean, it’s really not all that stretched out; the Clubman is only 9.5 inches longer, bringing the total length of the car up to 155 inches, which is still 16” shorter than my Pro5. And it drives… like a MINI. That is, spectacular road feel. The whole marketing brochure nonsense about “go-kart handling” is, in fact, not just marketing nonsense. There’s a button marked “Sport” in the car which tightens up the steering and improves throttle response—I don’t know why anyone would ever even consider turning that button off. (Well, OK, actually I do: supposedly the car delivers better mileage that way.)

And the Cooper S is just fantastic. No, it’s not rocket-fast like the Speed3, but the road feel on the MINI is just so much better than the other three cars that it feels almost as fast. The shifter is great, a very close second to the Honda, and the feedback through the steering wheel was easily the best. The cockpit is, of course, a little quirky. The truly gigantic center-mounted speedometer is weird, but unlike the speedo in the Si, this turned out not to bother me at all. I dislike the power window control not being in the door (it’s on the center console), but the driving position, pedals, and steering wheel are all very well-configured. It is simply a blast to drive. Hands down, the most fun driving experience of the four.

Being a BMW brand, just about every feature under the sun is available on these. There are a zillion options, from checkered flag side markers to Bluetooth and full iPod integration. Obviously this means it’s possible to really jack up the price, but all the gizmos are certainly available. The BMW thing also means reliability is only about average, but all maintenance included for the first 3 years/36,000 miles. The boys will outgrow the bitty backseat in not too long, so three years of total coverage would probably do the trick—that’s probably about how long I’d keep it anyway; I’d probably lease.

Oh, and the mileage is crazy good: 26 city, 34 highway. The salesman reset the trip computer when I took the wheel on the S, and I drove it very hard and still pulled 24 mpg for the trip. Again, not my primary concern but it certainly would offset the price tag a little.

And there’s no issue with color choice on the MINI. Gorgeous British Racing Green, anyone? Check this out: 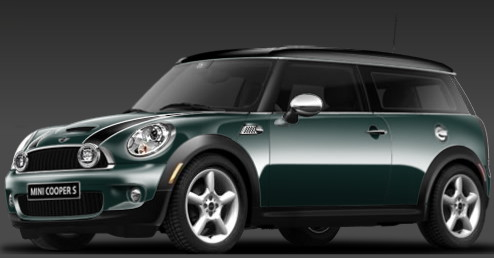 As much as I’d love to jump in and lease it right now, the wait on an order for a Clubman S is now 16 weeks. Four months is quite a while. So, I think I’m going to wait for a while longer and see if availability improves and see what kind of track record the Clubman generates over the next year or so. But it’s wild good fun and I’m very positively inclined.